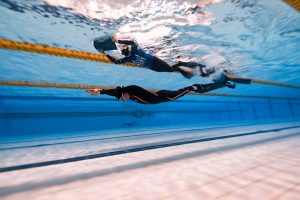 This weekend, Bristol Freedivers hosted their 3rd Bristol Blue Freediving competition, which this year incorporated the British Freediving Association’s National Freediving Championships.  The event took place across two days, with the dynamic (with fins) taking place at Hengrove Park Leisure Centre on Saturday 24 March and the dynamic no fins and static at Horfield Leisture Centre on Sunday 25.

33 athletes gathered in Bristol from all across the UK and from across the water too – 9 nationalities in total were represented.  The level of experience varied vastly, from world champions and national record holders to 7 people competing at their first competition. Testament to a fantastically well run event, twenty-seven new personal bests were set.

The winners of the National Freediving championships were Adam Drzazga and Beci Ryan and the overall male and female winners of the competition were Stig Pryds and Camilla Salling Olsen, true to their Viking roots they came and conquered! The gold medalists for the static element were Georgina Miller (06:28) and Adam Drzazga (06:13), for dynamics it was Camilla Salling Olsen (184m) and Stig Pryds (192m) and for dynamic no fins Beci Ryan (149m) and Stig Pryds (150m).  The standard of newbie performances this year was so high, with Rosie Williams (04:32 STA, 111m DYN, 100m DNF) and Mik Bjorkenstam (05:30 STA, 109m DYN, 117m DNF) crowned the winners.  Newbies David Mellor and Alex Atkins also deserve a mention, the competition for this newbie spot was unusually high and their performance were impressive with a lot more clearly still to give.

Freediving is an incredibly wonderful and strange sport where at one moment athletes are trying their utmost in the water to give their best performance and at the next, coaching someone else to reach their peak performance, even if it means they outrank you or beat you to a place on the podium.  Bristol Blue’s 3rd competition was no exception to this rule, the organisers managed to create a calm, relaxed atmosphere, belying the incredibly hard work and effort that had clearly gone on well in advance of the event and behind the scenes on the day – from training and arranging the super slick safety team,  organising the AIDA judges and assistant judges, securing (top) sponsors and managing an enthusiastic and friendly team of volunteers.  Keeping control a bunch of nervous freedivers attempting to get into their zone of zen isn’t always easy and they did a wonderful job!

Bristol hosted its first international freediving competition on Sunday 27 November with 30 competitors diving for prizes in static apnea, dynamic and dynamic without fins. Alice Hickson won the overall competition for the ladies, and Adam Drzazga for the men. The ‘best newbie’ award was won by Dave McGowan for the men and Kate Leney for the ladies.

Eoin Clarke set a new Irish National Record for his 134m DNF swim, increasing his previous record distance by 17 metres. He said “I’m proud to have been able to represent Ireland and I hope this will encourage more Irish swimmers, home and abroad, to get involved in the life changing sport of freediving”. It certainly was a day for the Irish as Dave McGowan also set a new Irish National Record of 05:59 static. The Men’s DYN discipline was won by Mike Benke.

Phillip Fennell swam 162m DYN to claim the top prize for male dynamic swim. Alice Hickson won for the ladies DNF with a 154m swim, and Anita Jasso winning with a 150m DYN. Alice’s static of 06:36 minutes secured her the overall lead, and similarly Adam Drzazga’s static of 06:38 winning for the men.

On her win, local freediver Alice said “I felt anxious on the day for everything running well as I’d helped with preparation, and my partner was also competing. In the end I don’t think I had any nerves left for my own dives!” All the athletes we spoke to thanks the organisers, sponsors and volunteers for putting together the event. Adam Drzazga added “There was a very calm atmosphere throughout the entire competition. My dives for me were a challenge, however I did my best on the day and I am very pleased with my white cards.”

The competition, held at Horfield Leisure Centre in the North of the city, was hosted by Bristol Freedivers club, which has been active since 2008, supported by the British Freediving Association, PADI, Divesangha clothing and OMER diving equipment. Organiser and founding member of Bristol Freedivers Andy Jardine said “In Bristol we’ve been talking about running a competition for some time, so to make it happen was really exciting. The best part for me was seeing so many people from all over the UK, different clubs and new faces all getting together and having a great time”.

Some stages of the competition were streamed live through PADI’s online TV system. The morning static videos reached over 35,000 views and 18,000 views of the closing ceremony. We are encouraged by this increasing interest in freediving in the UK and abroad, and hope to see more new faces at competitions and recreational diving meets in the future.

On Saturday 2 July, Alice Hickson broke yet another national record, in the A-Final at the Individual AIDA Pool World Championships in Turku, Finland, swimming 180m without fins on one lungful of air (over 7 lengths of a 25m pool) and winning a silver medal. Alice held the previous British record of 174m, set at last year’s World Championships in Belgrade, Serbia, for which she won a gold medal. The 180m swim was a personal best for Alice and was just meters short of the winning World Record dive of 185m by Magdalena Solich of Poland. This record marks a fifth for Hickson in a freediving career of just eighteen months!

Alice had this to say of her performance: “I felt more nervous than usual maybe because of other people’s expectations and yesterday wasn’t the best preparation, but I had a little word with myself and reminded myself that it’s not about the numbers of anyone else, just enjoy the dive and come up clean! And it’s still early days this is just the beginning of my freediving journey.”

Two World Records were also broken in the DNF World Championship A-Finals, both by Polish Freedivers, Magdalena Solich and Mateusz Malina, and both spectacular performances and strong. Magdalena swam 185m breaking Natalia Molchanova of Russia’s World record of 182m, set at the AIDA Pool World Championships in Belgrade in 2013. Natalia’s presence at World Championship events is sorely missed she was one of the most loved and revered freedivers to grace the sport of freediving. The icing on the cake for Poland came when Mateusz Malina broke his own World Record of 232m set just a few days earlier, swimming 244m (that’s over 9 lengths of a 25m pool).

For the first time ever in the history of the sport of freediving, people at home could watch the event unfold moment by moment with live streaming and commentary by Carla Hanson (AIDA International President) and Antero Joki (Finnish Freediver & AIDA International Technical Officer). This potentially marks a new era for competitive freediving.

The 7th Great Northern competition and the UK BFA Pool championships has been announced for the 10th April, 2016

The competition has reduced to one day for this year, and will be two disciplines over two sessions.

Static (STA) will be held on the first session, and the second session will be a choice of Dynamic with fins (DYN) or Dynamic no fins (DNF). In the dynamic no fins sessions points will be multiplied by 1.3 to even out the fairness in the point score.

Please visit the site www.freedivingcompetition.com to see more details and enter the competition.

Welcome to the BFA website. Here you will find the latest news in the journey of British freediving.